This is Section 3 of 7: History of the Contamination & the Science Behind the Claims

Their disposal of the wastewater associated with the dry-cleaning process went through an on-site septic system across the street from the Tarawa Terrace well fields allowed toxic chemicals to enter the aquifer.

By August of that year, water that ran through the Hadnot water treatment plant was contaminated. 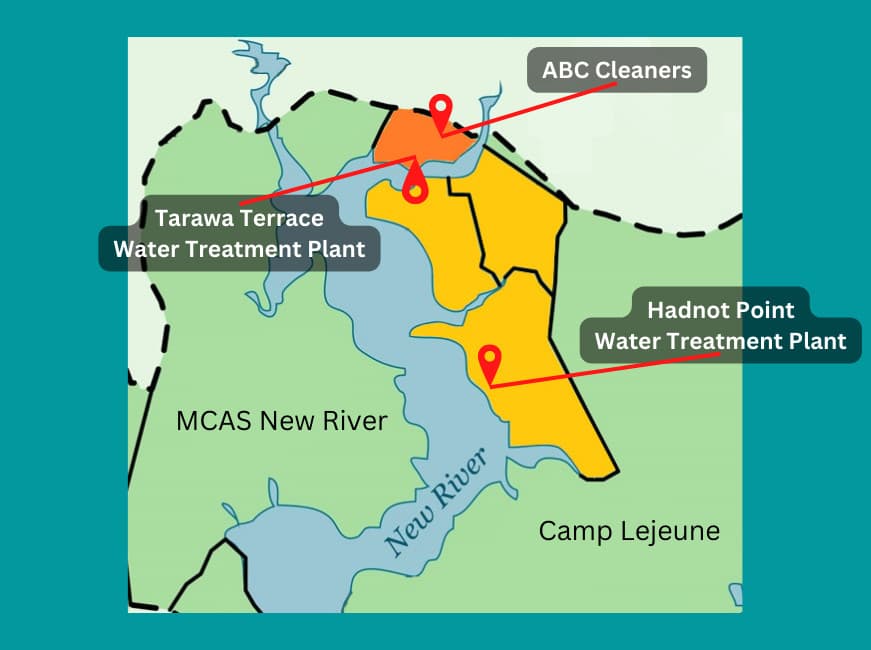 Secondary contamination stemmed from the cleaning of military equipment on base with various degreasers and fuel leaks from a generator tank.

By 1958, the first scientific report was published by H.E. Legrand.

This report indicated that wells at Hadnot Point, Tarawa Terrace, and Montford Point were built on thin shell rock, which allowed contaminants to enter the aquifer, effectively allowing the drinking water at Camp Lejeune’s to become contaminated.

From Inspections To Polluter

That is precisely what happened from 1958 through 1979. The Department of the Navy’s Bureau of Medicine and Surgery set various standards for drinking water over those more than two decades.

Inspections were conducted at Camp Lejeune, but nothing was done to correct the contamination, nor to locate the primary source. This changed in 1979, when Camp Lejeune was officially cited by the EPA as a polluter.

Another study, conducted by North Carolina’s Utilities, Energy and Environmental divisions, found more troubling conditions at the base.

The water treatment plants did not employ a chemist to conduct inspections, nor were any tests conducted for inorganic chemicals, the very chemicals that are now known to be carcinogens.

In short, these water treatment plants simply did not inspect the water flowing through it, and this litigation is a direct result.

Any way you look at it, these measurements are disturbing, and the fact they were allowed to continue for decades was simply unacceptable.

In 1989, the EPA put Camp Lejeune on the CERCLA National Priorities List, and both Camp Lejeune and ABC One-Hour Cleaners were named as Superfund sites.

In response, Camp Lejeune’s Assistant Chief of Staff, in a shocking display of ignorance, said that “we were not aware.”

Taking off my scientist hat for a moment, one would think that being put on the CERCLA National Priorities List may implicate federal preemption in court, which would circumvent North Carolina’s statute of repose.

Other lawyers had the same thought, but in 2011, a federal court disagreed, noting that the CERCLA legislation expressly required state statutes of limitation and repose to control.

TCE is a halogenated aliphatic organic compound. The internet describes the entire category of compounds as organic chemicals in which one or more hydrogen atoms has been replaced by a halogen (i.e., fluorinated, chlorinated, brominated or iodized).

It is primarily used in industrial cleaning solutions and as a universal degreasing agent. It can be found in consumer products, including wood finishes, adhesives, paint removers, and stain removers. TCE can also be used in the manufacture of other chemicals.

According to studies, it is the most commonly detected volatile organic chemical in U.S. groundwater.

Interestingly, it is not always a human carcinogen, and some exposure may even be safe. But when processed through the liver, it becomes a real human health hazard.

Exposure can result in effects to the immune and reproductive systems, liver, kidneys, central nervous system, and may affect fetal development during pregnancy.

You’ll note that these are all conditions implicated by the Camp Lejeune litigation.

PCE is used primarily in dry-cleaning operations, even if it also has a degreasing property. Even with acute exposure through inhalation, humans can suffer kidney dysfunction and neurological problems.

But with long term exposure, like what happened at Camp Lejeune, PCE exposure can cause adverse effects in the kidney, liver, the hematologic system, and in reproduction.

The EPA has listed PCE as a likely carcinogen.

DCE is an odorless organic liquid that has two slightly different forms, a “cis” form, and a “trans” form. Both the “cis” and “trans” forms are used as solvents, to extract rubber, as a refrigerant, in the manufacture of pharmaceuticals, and in making other organic compounds.

Both forms of DCE have the potential to cause liver, circulatory and nervous system damage from long-term exposure.

Studies have shown that it may result as a degradation product of TCE and PCE.

Vinyl Chloride is used to make PVC and a variety of plastic products, including packaging materials.

Per the National Institutes of Health – Vinyl chloride has been used in the past as a refrigerant, as an extraction solvent, in the production of other chemical compounds, as an aerosol propellant, and in drugs and cosmetic products.

Vinyl chloride exposure is associated with an increased risk of liver cancer, brain and lung cancers, lymphoma, and leukemia.

And finally, Benzene is everywhere. It is in the top 20 in terms of chemicals in terms of production and is generally used in making other chemical compounds.

The Department of Health and Human Services has listed Benzene as a carcinogen that can cause leukemia and cancers of any or all the blood-forming organs.

These are all odorless, colorless compounds that were found for decades in the drinking water at Camp Lejeune.

And as you can see, they have all been conclusively found to be extremely harmful if consumed by human beings.

When you look at the compounds above and what scientific studies have linked to exposure, the VA’s recently announced list of ‘presumed conditions’ starts to make more sense.

The VA has declared that:

offer a presumed connection to exposure, as long as the other requirements for a claimant can been shown.

Importantly, this is not the universe when it comes to potential diagnoses implicated by this litigation.

Up Next: The Legislation