This is Section 8 Geographic deep dive – what areas qualify?

What are the boundary lines of Camp Lejeune?

The Camp Lejeune Water Contamination litigation has been the biggest case of the year so far, and there are no signs of it slowing down just yet.

Under the PACT Act passed in August of this year, claimants that would have otherwise been time barred can now file claims for their diagnosis resulting from their exposure to contaminated water.

We have covered the procedure and diagnoses required for a valid case before, but this time, we have a slightly more complicated question to answer.

What are the geographic limitations of a claim? The answer is not as simple as it may seem.

Does my case fit the geographic limitations of the PACT Act?

The statute itself is the best place to start, and the text appears clear on first look, offering a claim to anyone “who resided, worked, or was otherwise exposed (including in utero exposure) for not less than 30 days during the period beginning on August 1, 1953, and ending on December 31, 1987, to water at Camp Lejeune, North Carolina.”

So, what makes this question so difficult? We need to start with a definition of what Camp Lejeune actually is in terms of a geographic location.

The map below, from a 2012 water contamination statute, may be an informative place to start.

The 2022 statute did not include any such map or any words that could adequately describe the zone of danger, but the previous description should carry some weight when considering the universe of potential claimants.

Further, the fact that dozens of law firms are using this exact map on their websites should give additional support to its use here. 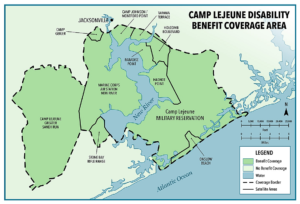 The Question to Answer

The question we need to answer is whether the statute intended to offer a claim to anyone on any part of the greater Camp Lejeune complex or only to the more limited ‘Camp Lejeune Military Reservation,’ and unfortunately, the statute is silent on these specifics.

The issue is that there is a primary base called Camp Lejeune, supplemented with six satellite facilities:

All of these in combination make up the greater Camp Lejeune area, and it is this area that was considered the benefit coverage area in 2012.

We have had calls from lawyers with cases from satellite facilities of the Camp Lejeune complex, such as Camp Geiger, and we believe these cases may be viable.

Making this question even more complex is a VA website that specifically includes Marine Corps Air Station New River as a zone of contamination but does not include any of the other five satellite facilities.

The question remains, does someone that was stationed only at Camp Johnson or Camp Geiger that has a diagnosis of one of the VA’s presumed conditions have a valid claim?

Based on previous application of federal statutes and general rules of construction, the answer must be a resounding “YES.”

Could the application of the statute be different as the Department of the Navy reviews the claims? Of course.

We simply won’t know until we start hearing responses through the claims process.

However, we believe that if these claims are denied, there is a subsequent pathway to litigation.

The Line Between A Good & Impossible Case

We have reached out to a number of firms handling these to get their opinions on the dividing line between a good case and an impossible case and we’ve heard differing opinions.

Most are casting a wide net and taking any cases with a good diagnosis and any exposure from the greater Camp Lejeune complex area as long as they meet the 30-day threshold..

A few are limiting their intake to those that were stationed only at the more limited definition of Camp Lejeune.

Without naming names, one colleague summed up the answer to the question as, “Take them all! If the statute doesn’t impose limitations, why should we?”

We tend to agree with that sentiment, that taking any cases from the primary area known as Camp Lejeune as well as any of the six satellite facilities makes logical and business sense.

But it can’t be that simple, can it? Not likely.

Even though the statute may open the door to claimants from all of the Camp Lejeune’s satellite facilities, obtaining a diagnosis may be more challenging.

There have never been any allegations of any water contamination outside Camp Lejeune as defined in the more limited sense.

Put another way, there are eight water treatment plants across Camp Lejeune:

Only three have been identified as being contaminated:

You can take a look the map above and establish pretty quickly the zone of exposure.

That’s not to say that someone stationed at Camp Geiger has no case, but it may be one factor that the Department of the Navy may take into account when evaluating the claim.

A casual look at the map shows that Camp Geiger is the geographically far from the water treatment plants that have been confirmed as contaminated, but that contamination is only one part of the story.

Two other sources of contamination occurred at Camp Lejeune in the forms of a generator tank leak and through the use of degreasing chemicals, and we don’t know specifically where those contaminations took place.

Likewise, we know nothing about the potential that water from one area of the camp was bottled, trucked or otherwise transported to other areas.

In other words, we can’t say that all water was clean and uncontaminated at Camp Geiger or any of the other satellite facilities, and as such, these cases are worth chasing, at least for the time being.

Our best recommendation is to seek and take any cases from anyone that can prove their exposure at any area within Camp Lejeune, including the six satellite facilities.

There are likely to be fewer cases that fall within the outer fringes of the map, but there are still likely valid cases.

At this time, there is no reason to be overly conservative in this regard. The standard intake should remain largely the same: